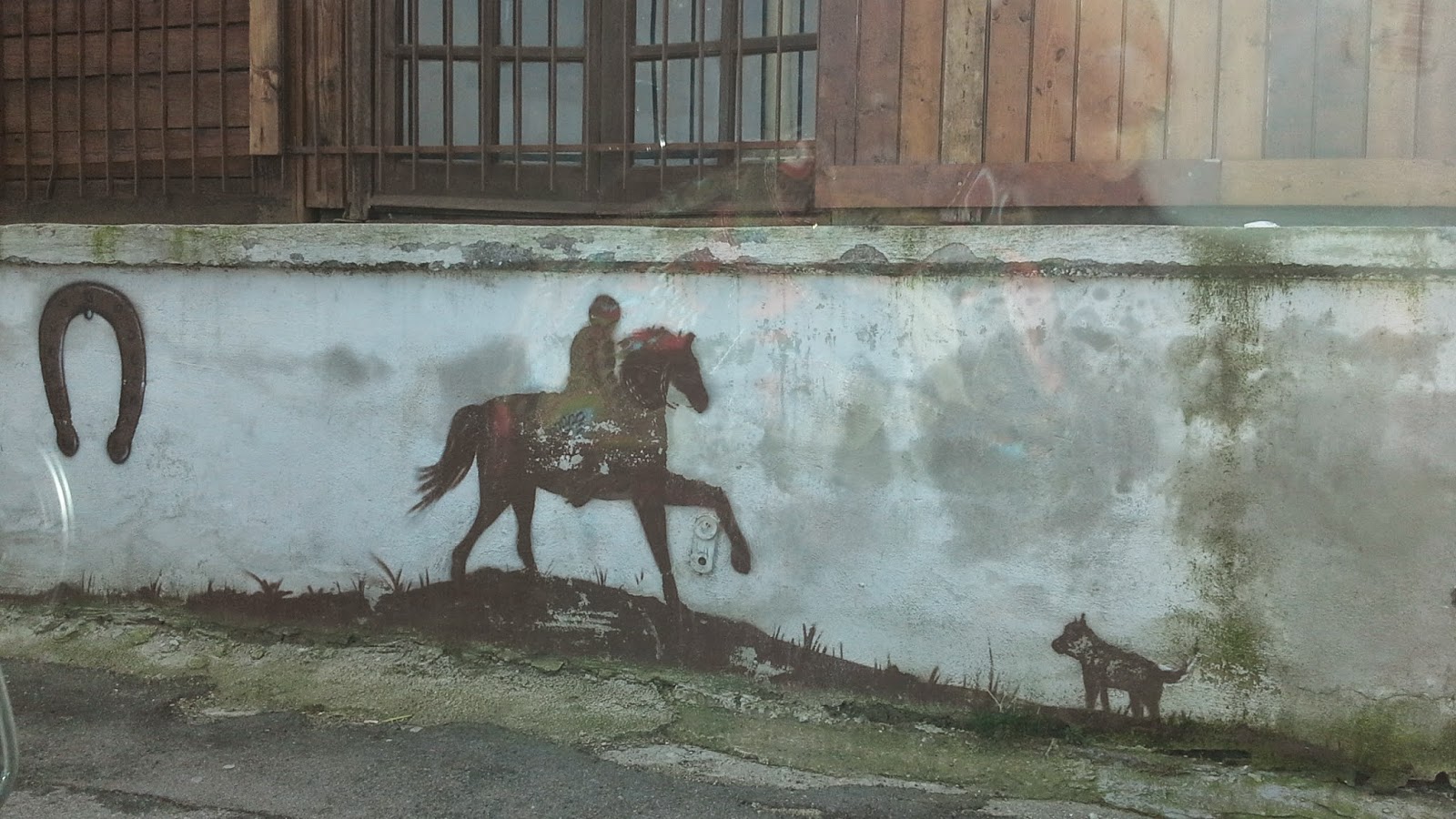 Mount Vesuvius wears a little veil of snow sometimes, like Mount Fuji… but the snow almost never comes down from the top. When we arrived at the stables, straight out of a spaghetti western, there were little flakes floating in the air. I assumed they were ashes from the volcano, but by the time we came back, the whole sky was a-flurry. 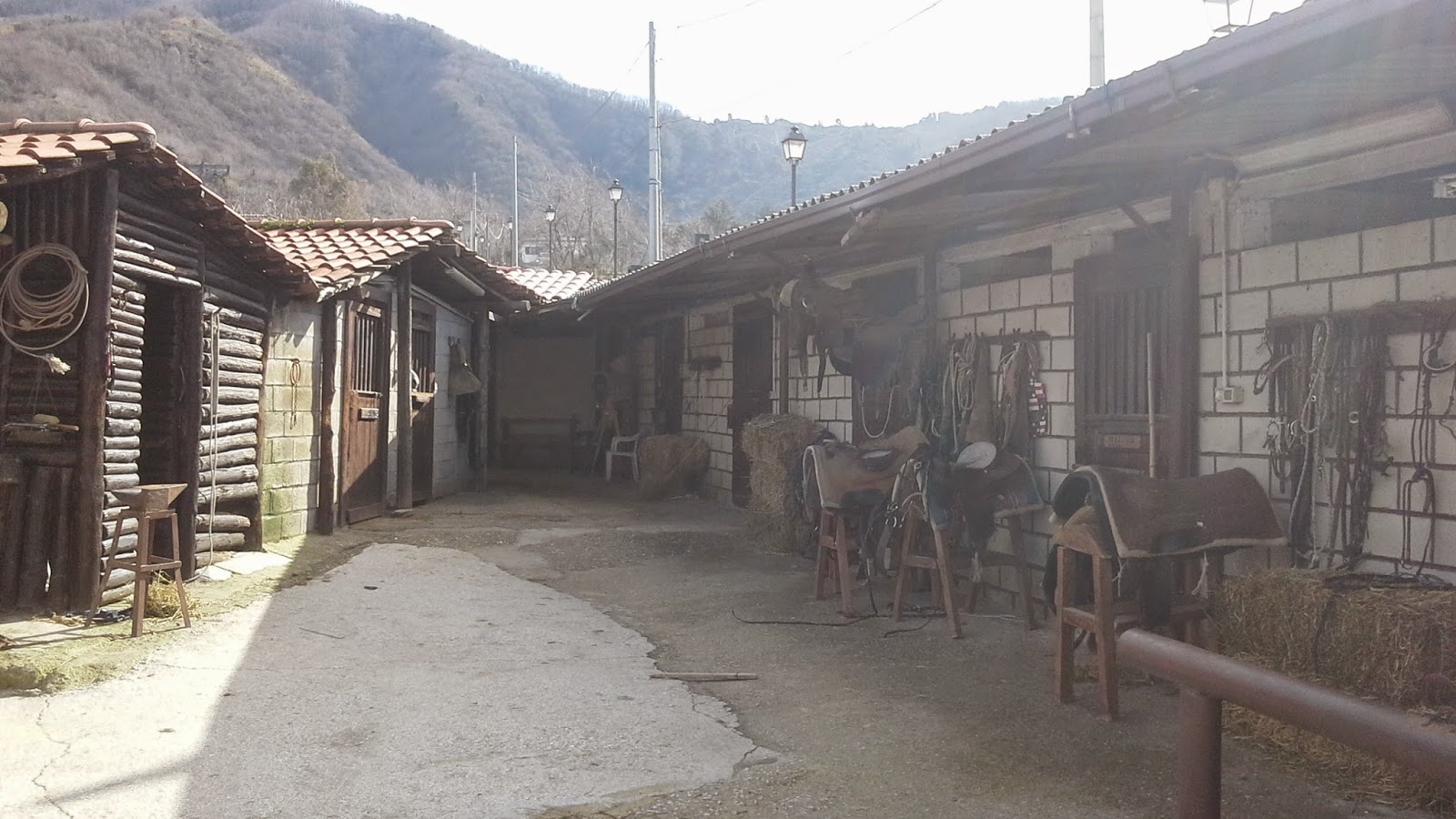 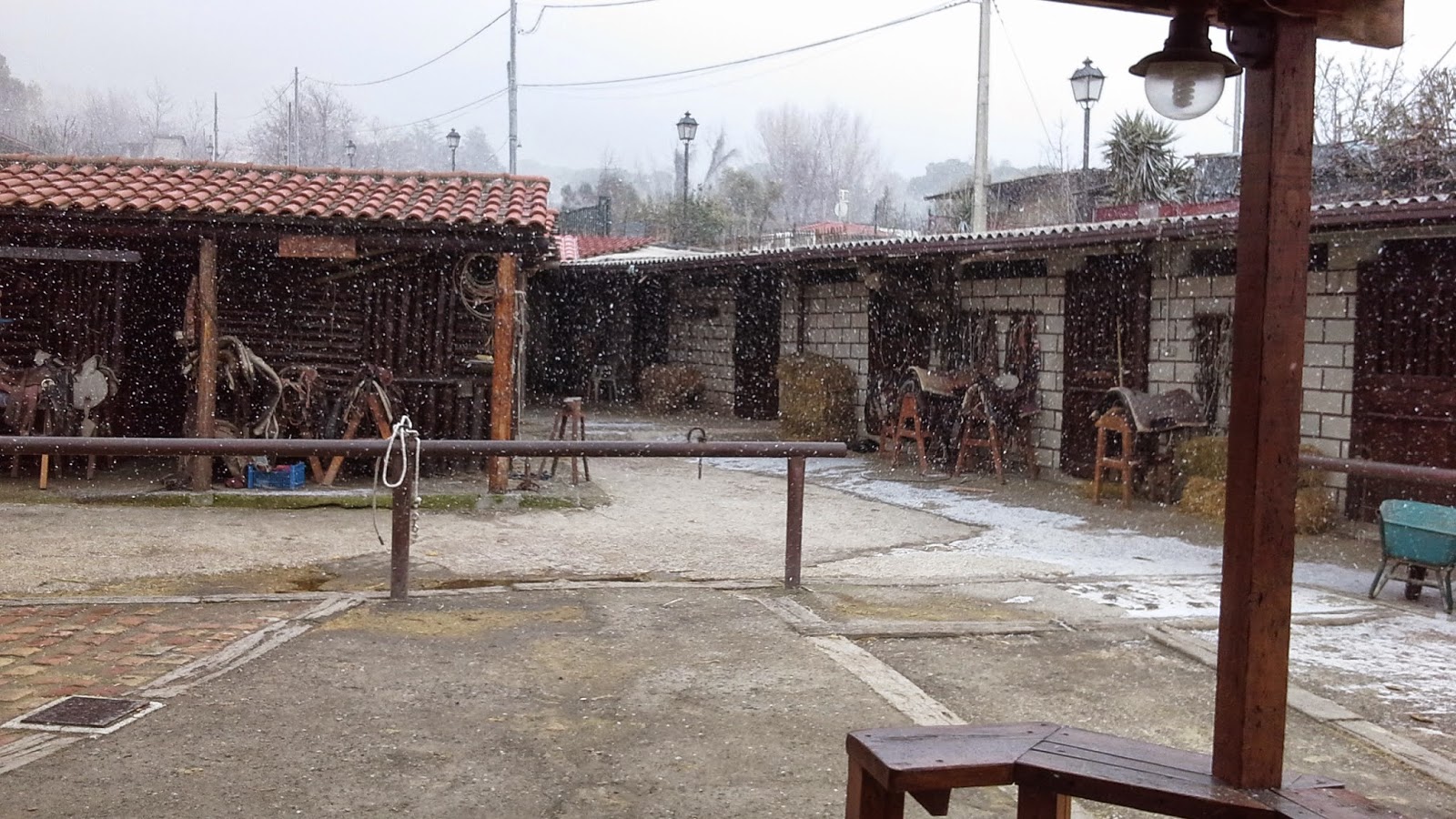 What a charming place. There were horses kicking on doors for attention. Spurs lying on a plastic chair. A cat with no nose. (Um, that wasn’t the charming part and no, you don’t get to see a photo.) 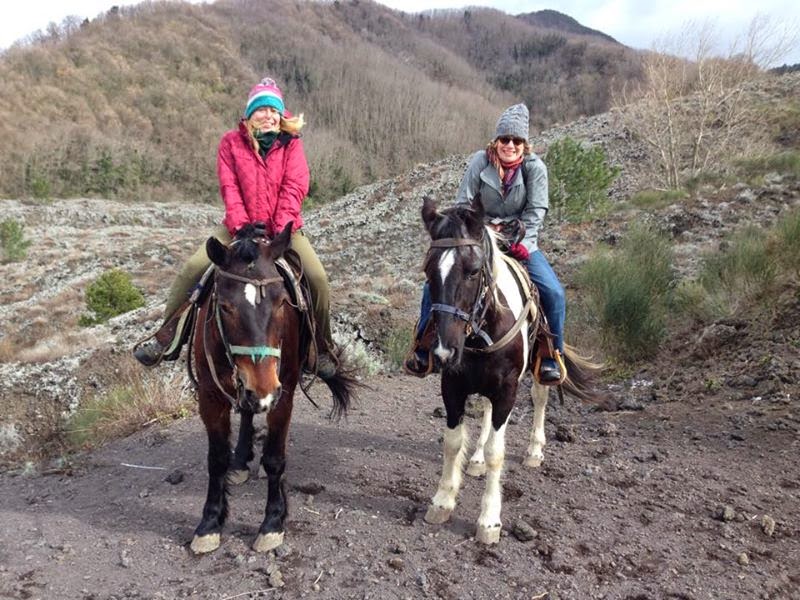 My companion Emily, who I met in the hostel, reminded me of two of my best friends smushed together. And she lives twenty-five miles away from me! So here we were two California blondes, set for adventure on the other side of the world. 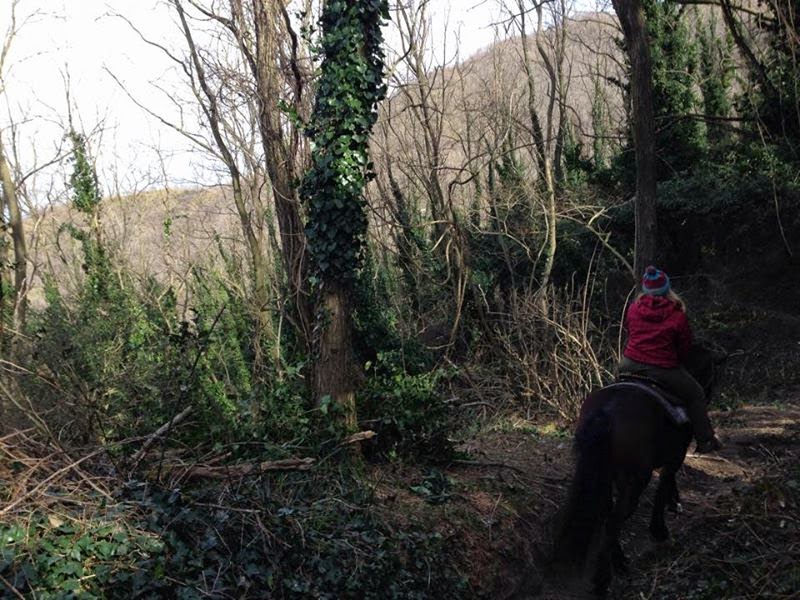 The ride was more exciting than any trail ride I’ve ever taken. The horses were strong and sure-footed, climbing some ridiculously difficult terrain up an abandoned railroad line. They had to look carefully for safe places to put their hooves, then lurch up some pretty steep slopes. Sometimes the path was worn so deeply our knees touched the edges of the ravine. The trees were clotted with African ivy along the west side of the mountain, a sign of the times. We rode up to the lava scar left by the 1944 eruption (you can see it running along the top of the aerial view here.) 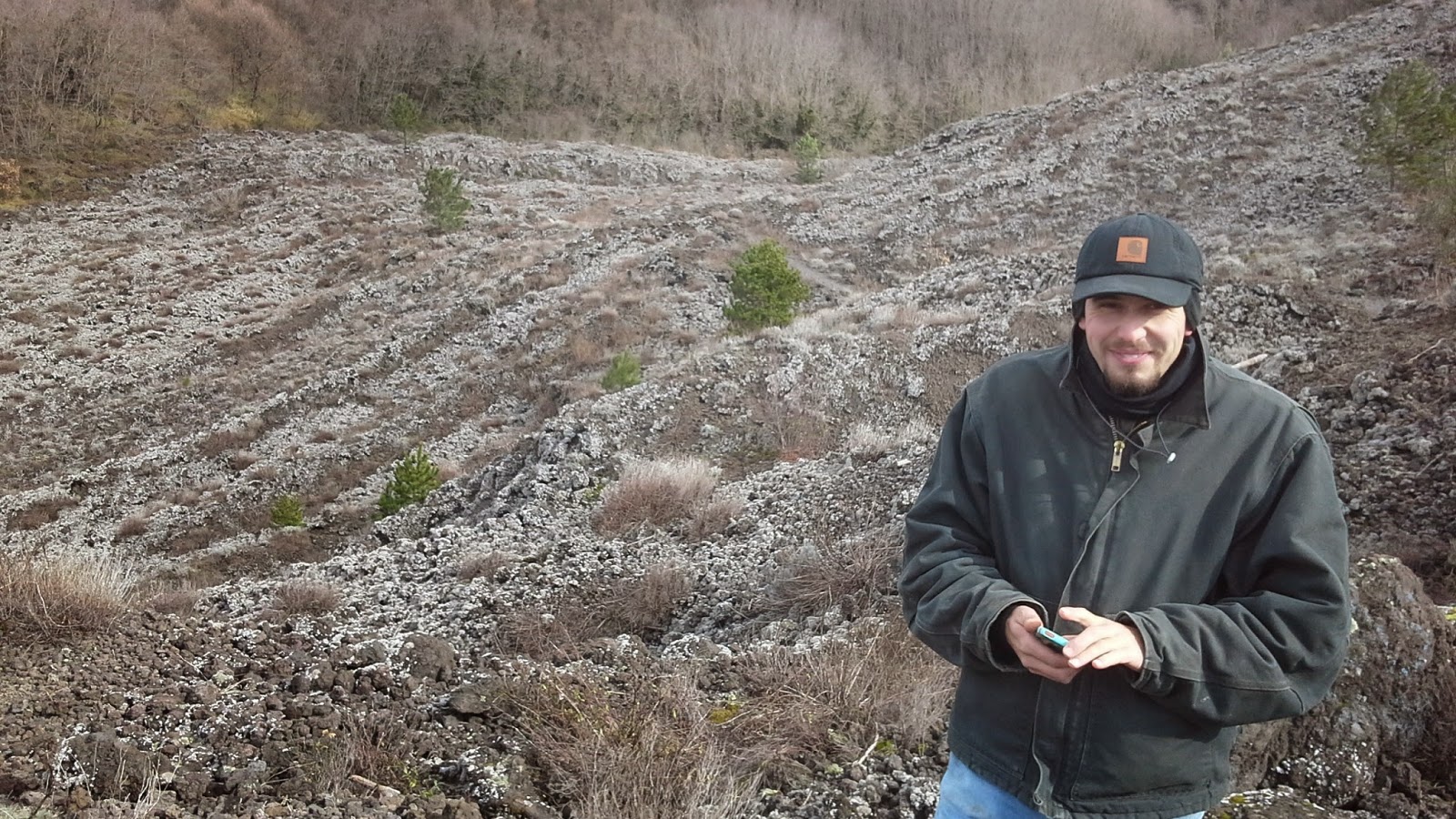 But our guide was absolutely wonderful. Davide (of Scarpa fame) has worked cattle on ranches in Idaho and Oregon, so he was full of stories and cowboy ACTION! He was able to assess our abilities, challenging me to ride more daringly and helping green (that’s what horsey-types call inexperienced riders) Emily learn the ropes. And when space allowed, he showed off his riding skills, putting his horse through some camera-worthy paces. 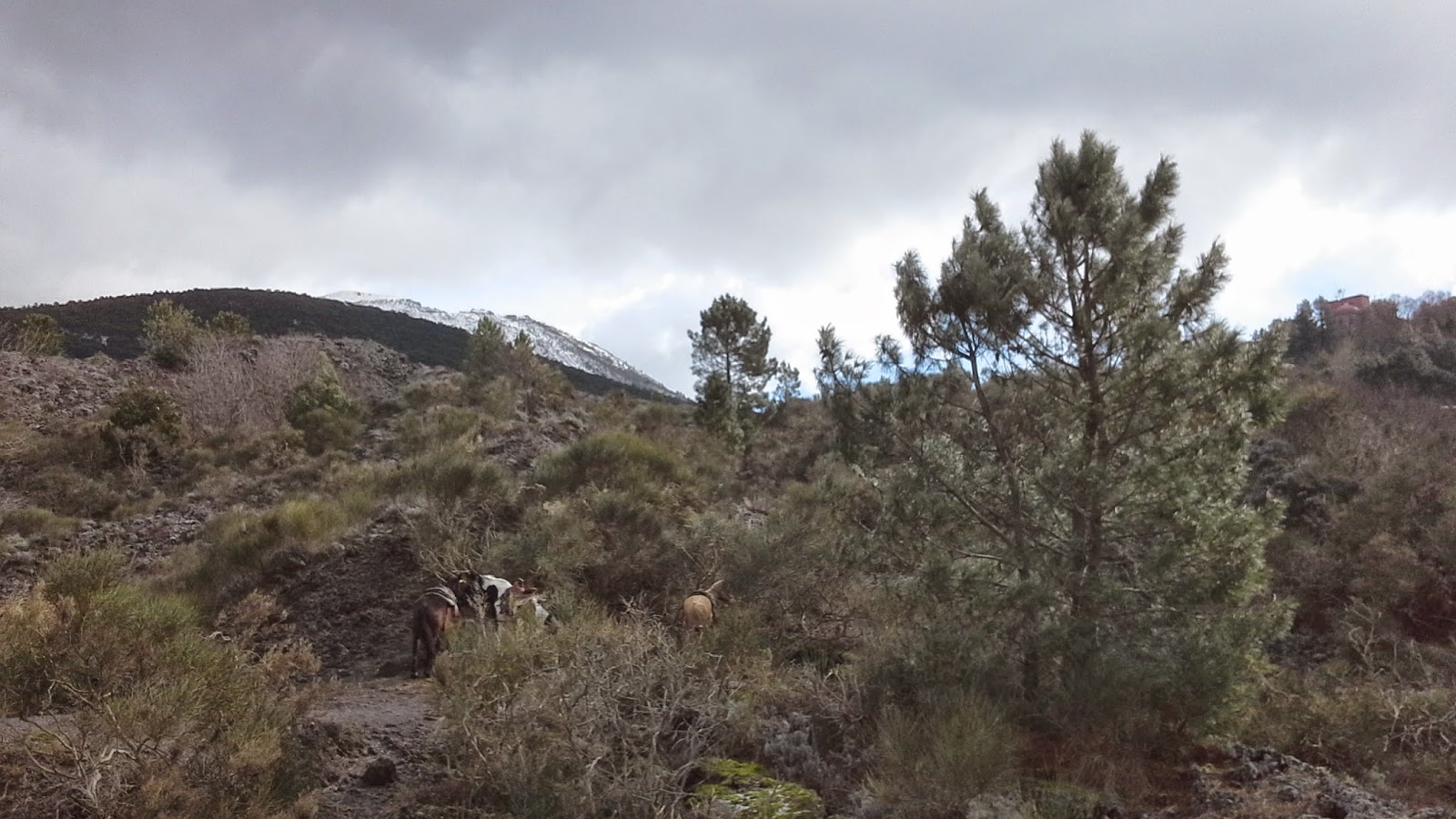 We didn’t make it all the way to the top, but you could see it from where we were. 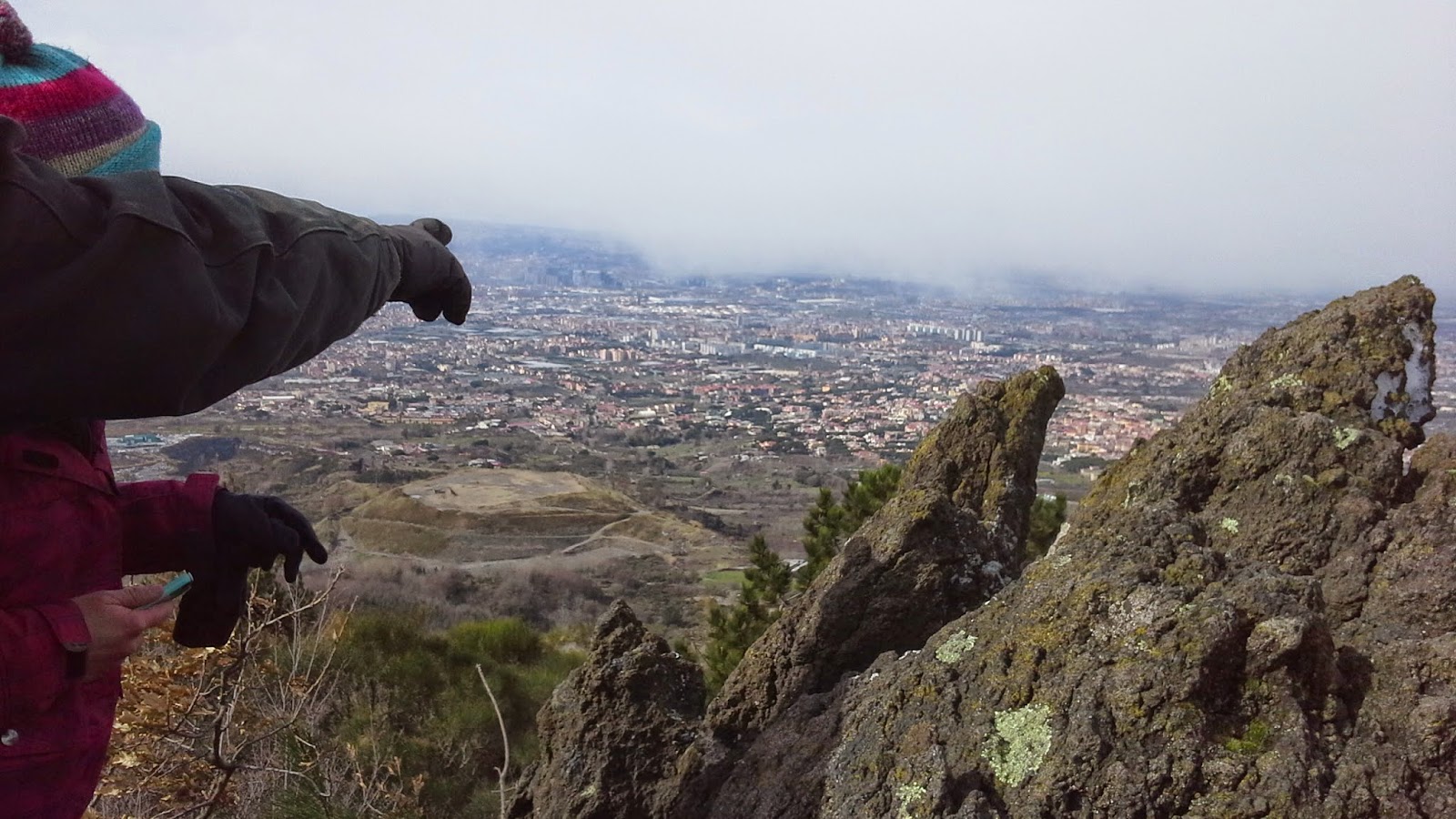 Pointing out Naples, below us. I learned that the peak to the north is Monte Somma, the mother of Vesuvius, which was destroyed in 79AD when Vesuvius was formed. We were riding on one of the world’s youngest mountains. (See the cool pix about this here.) 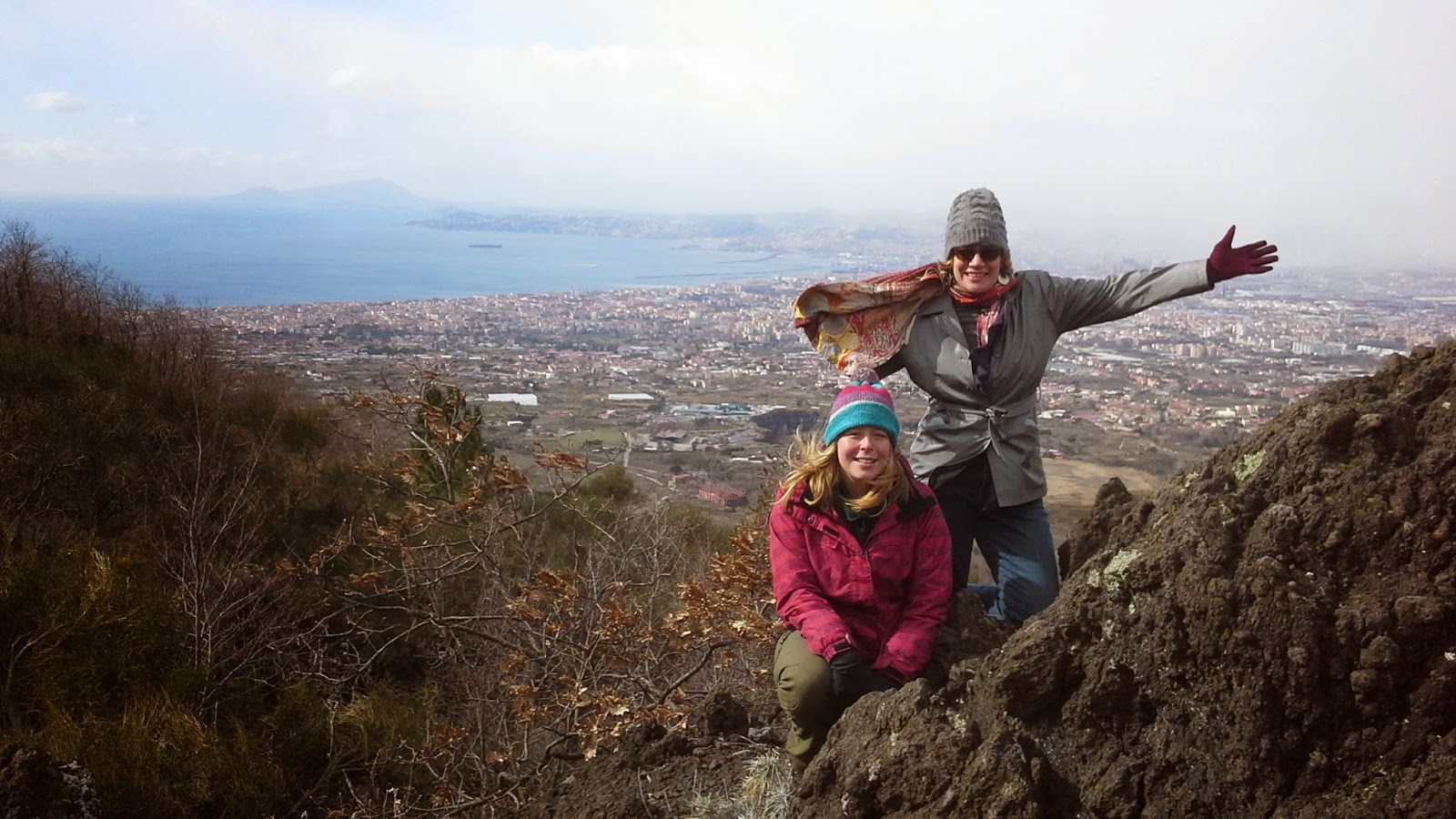 I had intended to dress somewhat in style on this trip, but the weather forecast was for 75 degrees that day and my plans were foiled. (Though if there’s a contest somewhere for dorkiest cowgirl, I’m in!)
I didn’t get a photo of it, but here’s a cartoon of the excitement.  Coming down the very steep trail, Emily’s horse, Aragorn, decided to take a step straight down. Emily said “Um, what do I do now?” When I tried to figure out what was going on, I noticed her butt was in front of the saddle horn….not a good sign. “My hand was on the ground, and I was staring right into the horse’s eye,” she said later when we laughed about it. Davide came to the rescue and helped her sort herself out. 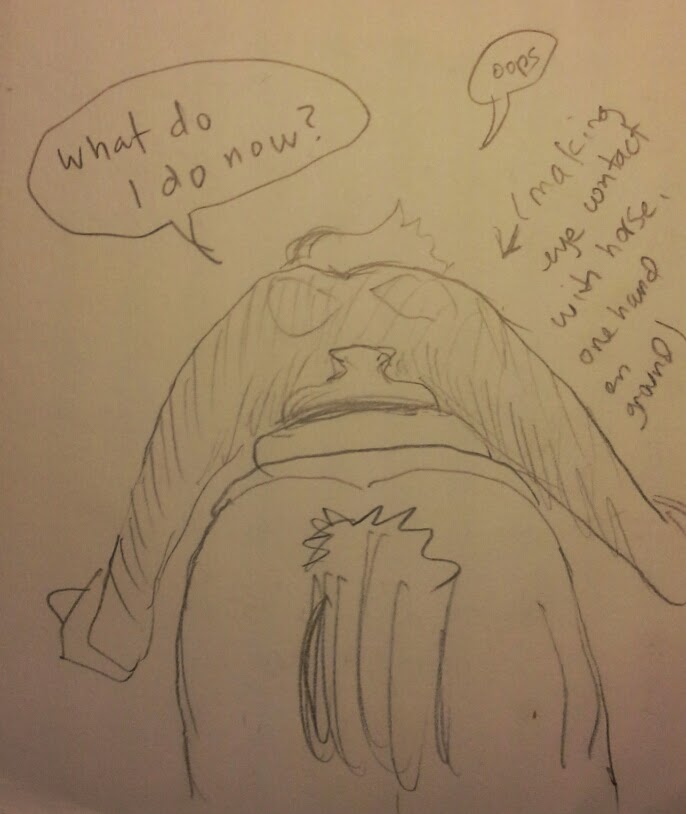 Kayla was the sweetest, strongest Pinto pony ever! 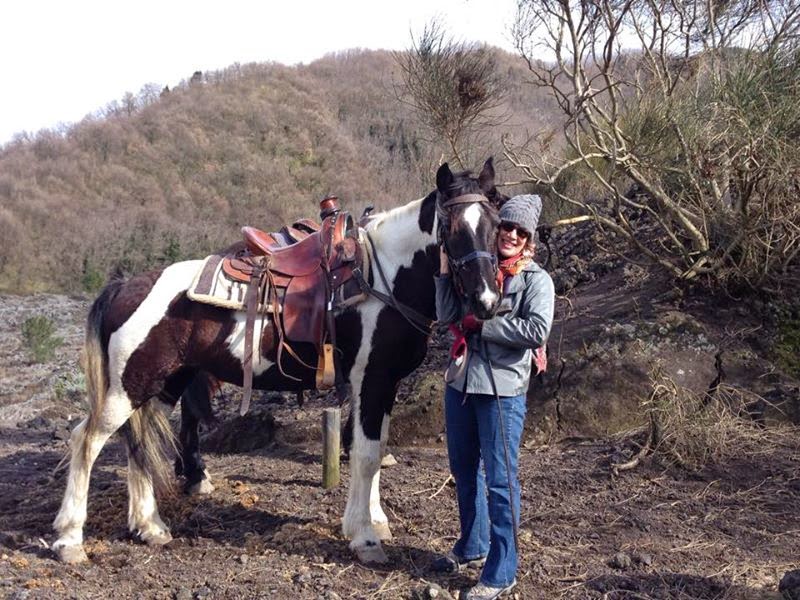 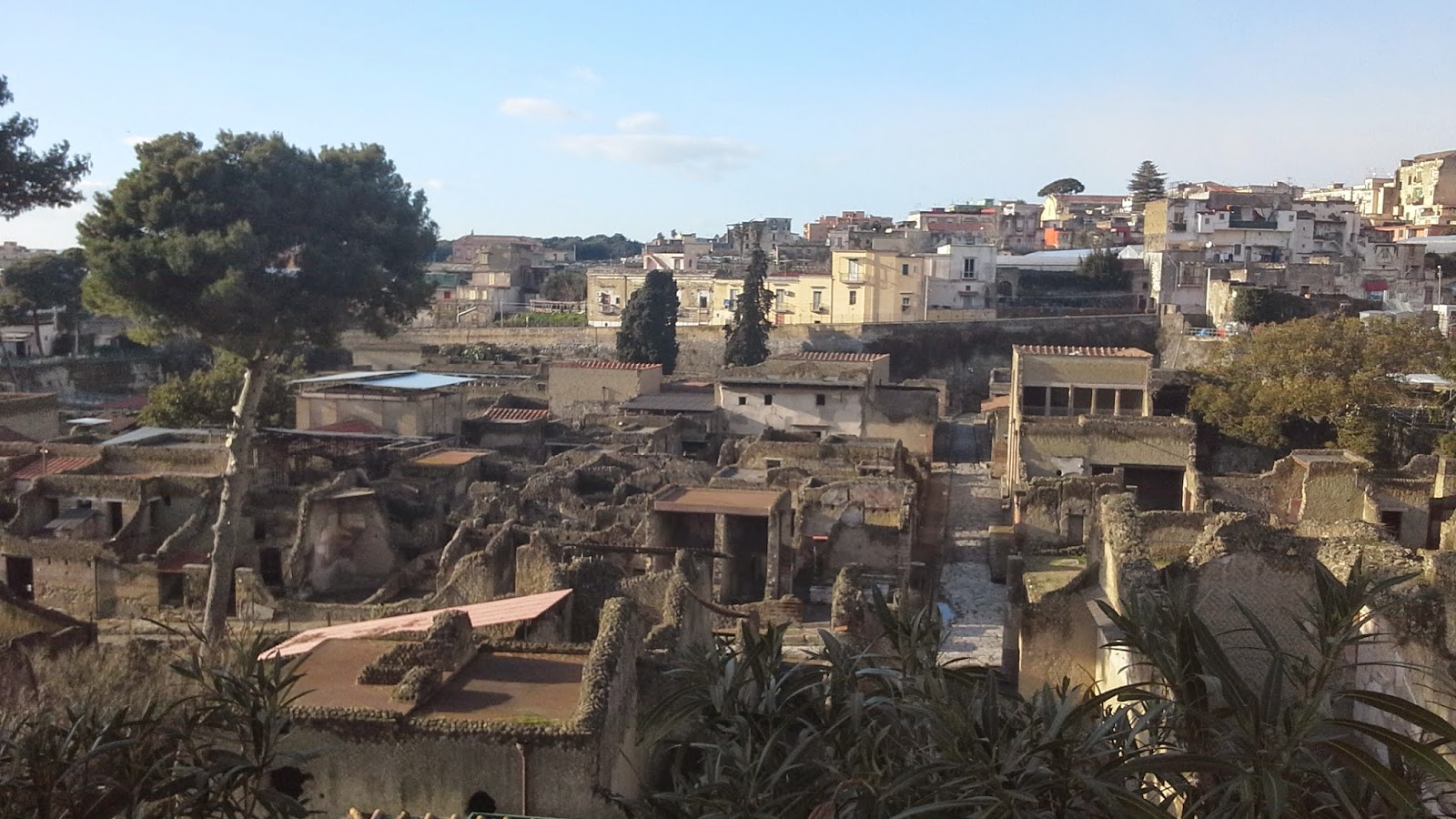 After the ride, Davide was kind enough to take us down to Ercolaneo (Herculaneum).

The site was closed, but we had a wonderful meal. It was so cold that the restaurant owner brought a bucket of coals (“Hot Lava”) to put under our table to keep us warm.

But the mountain still beckoned. We called Davide and asked him to drive us up to the crater. 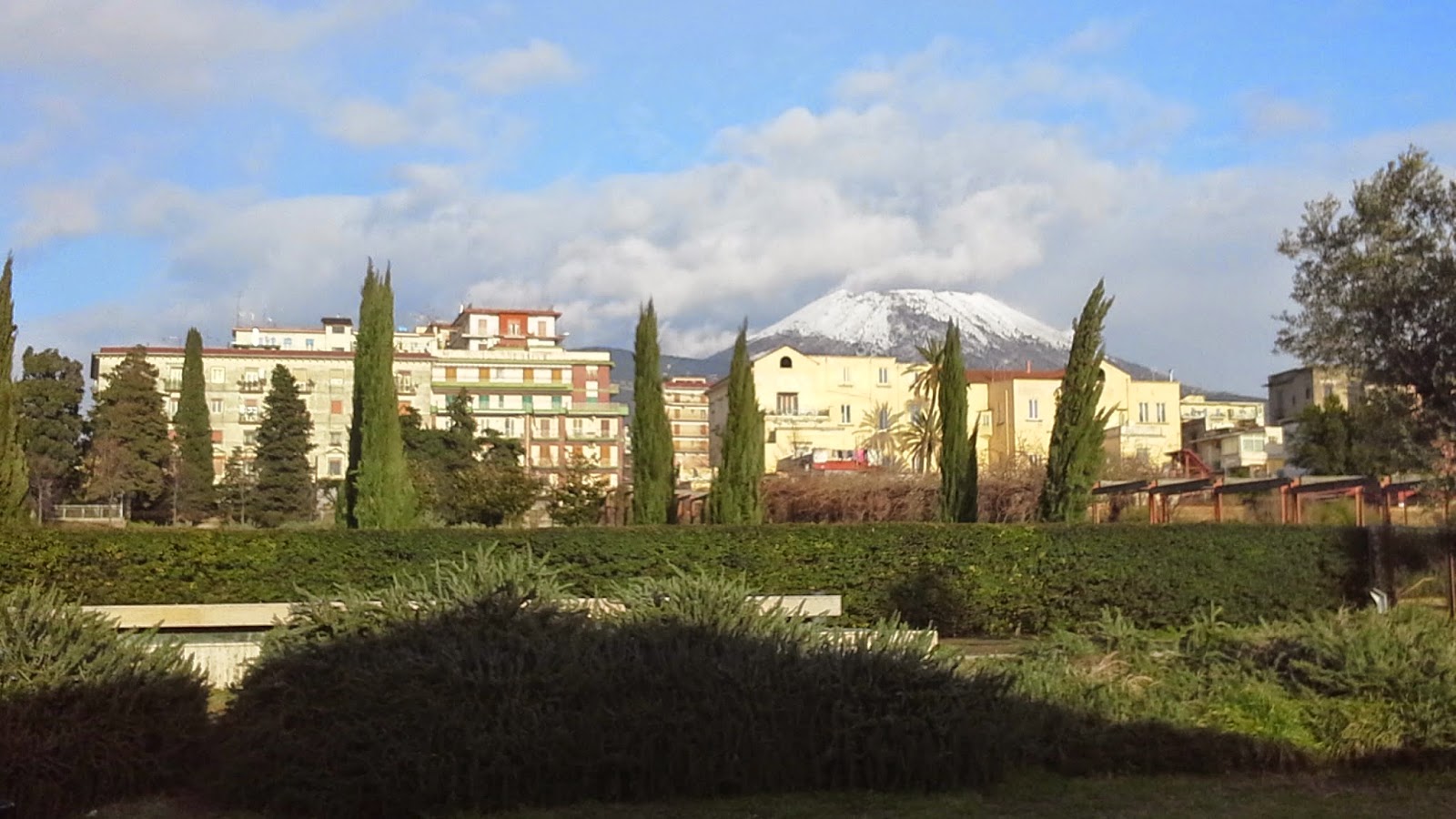 Giant statues loomed out at us on the windy trip up the mountainside. Around every corner was a scenic overlook, an abandoned, grafittied restaurant with broken glass (the economy has been bad here), or a dog standing in the road like they owned the place.

Halfway up, the road was closed due to snow, so we got out for a hike. Emily (also green because she’s a botanist,) smelled the trees to figure out what they were. She cried out in delight when she discovered a patch of succulents. The snow was rare and fresh, and the whole forest seemed filled with magic. 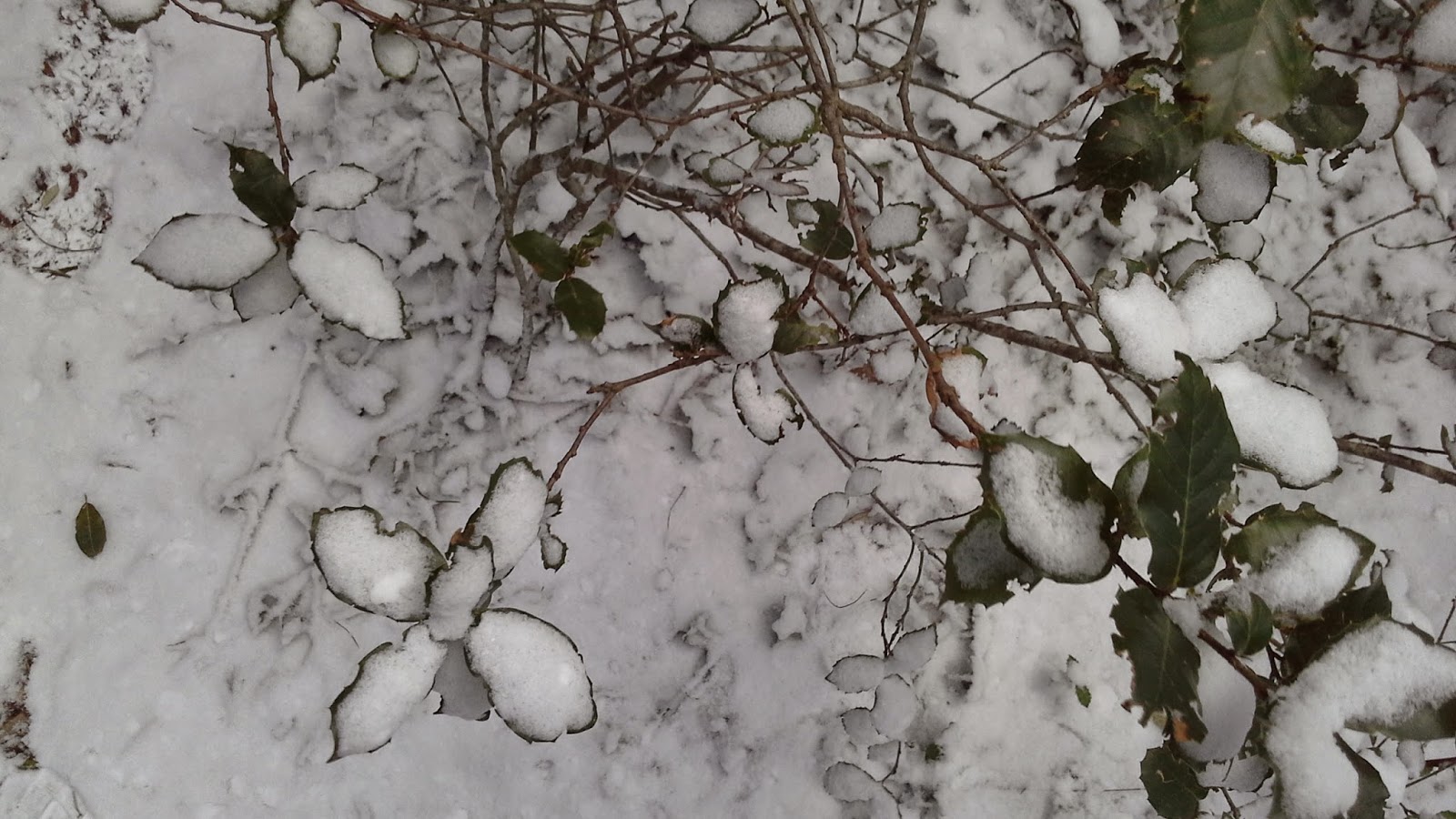 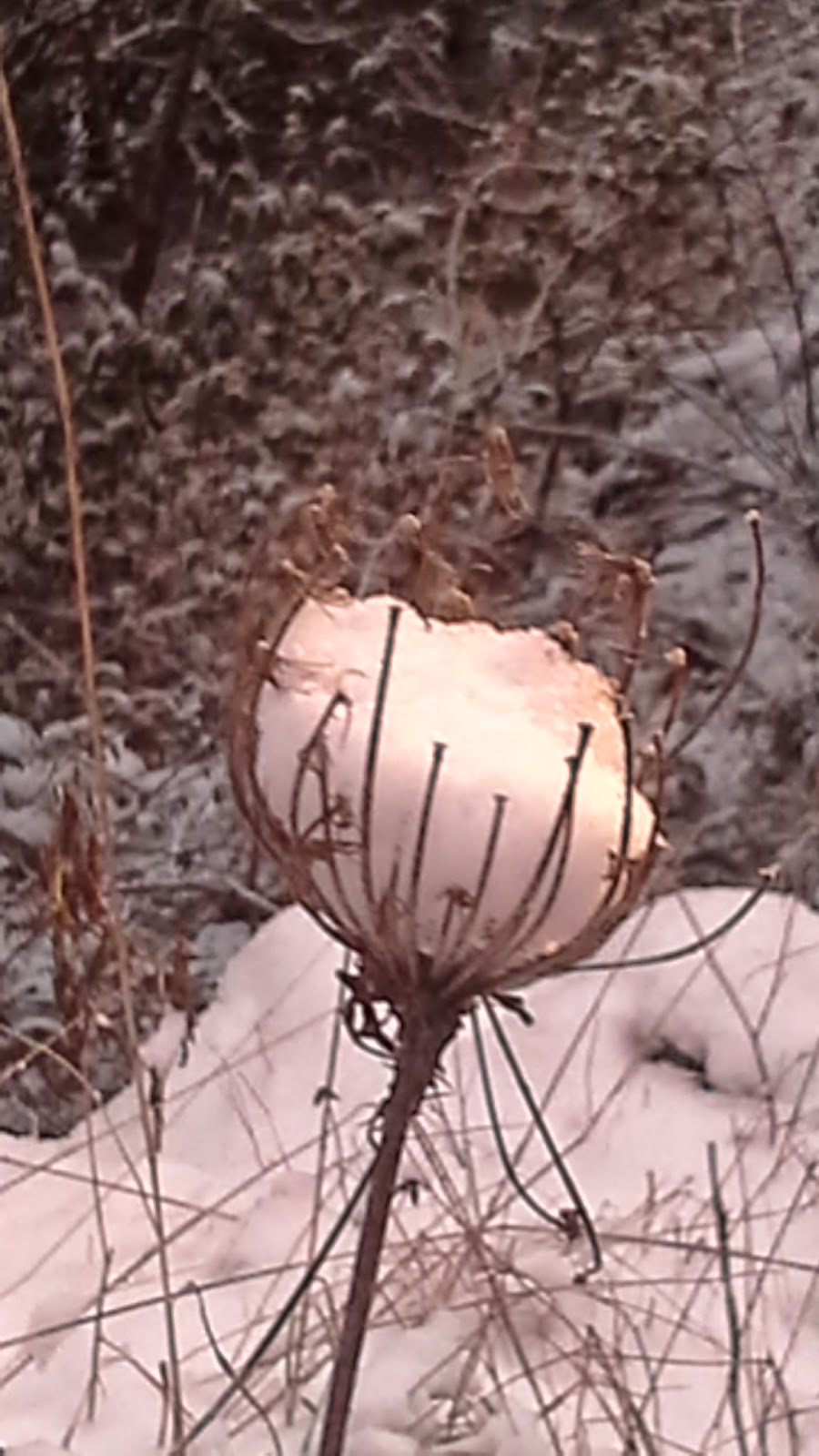 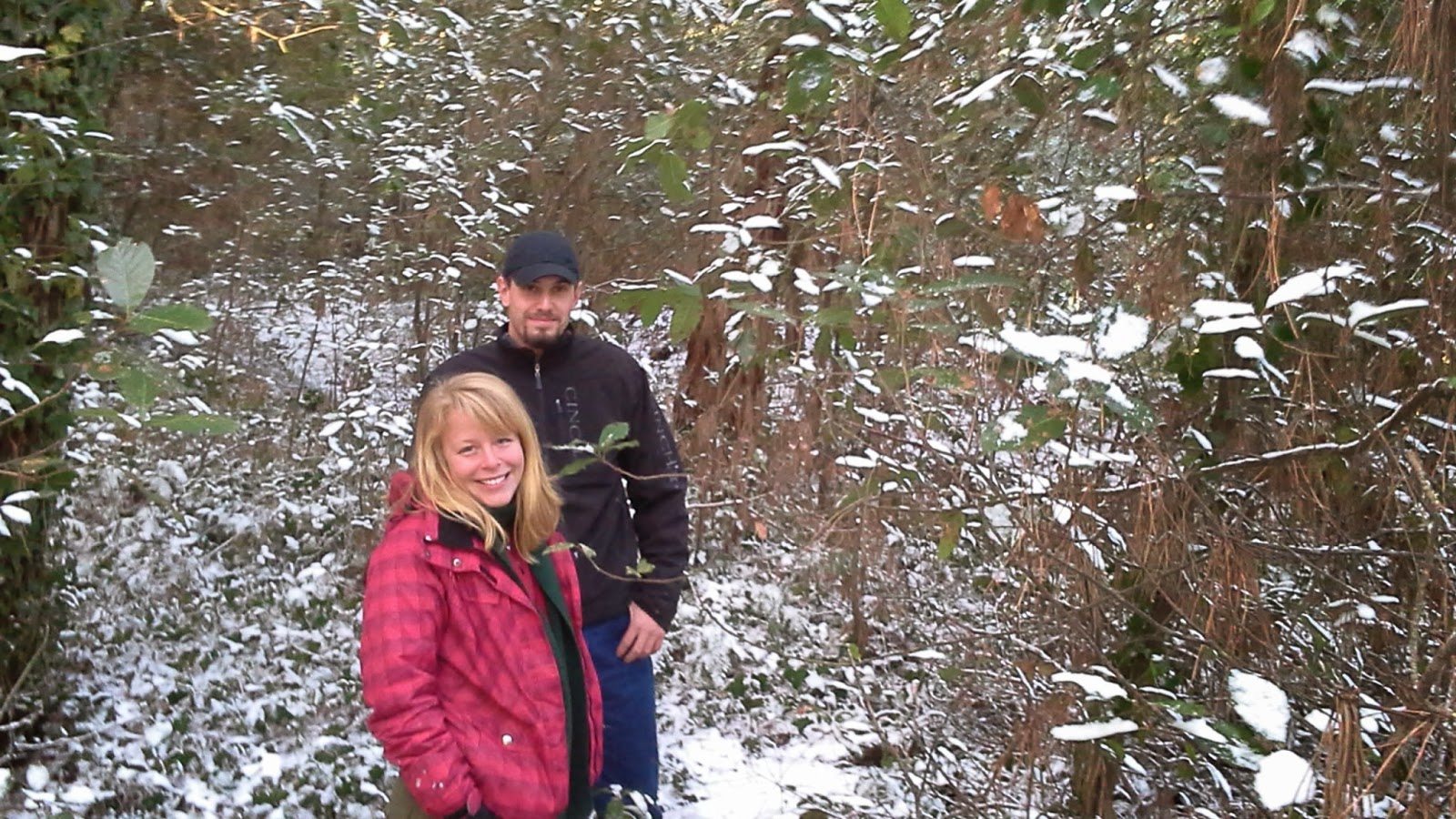 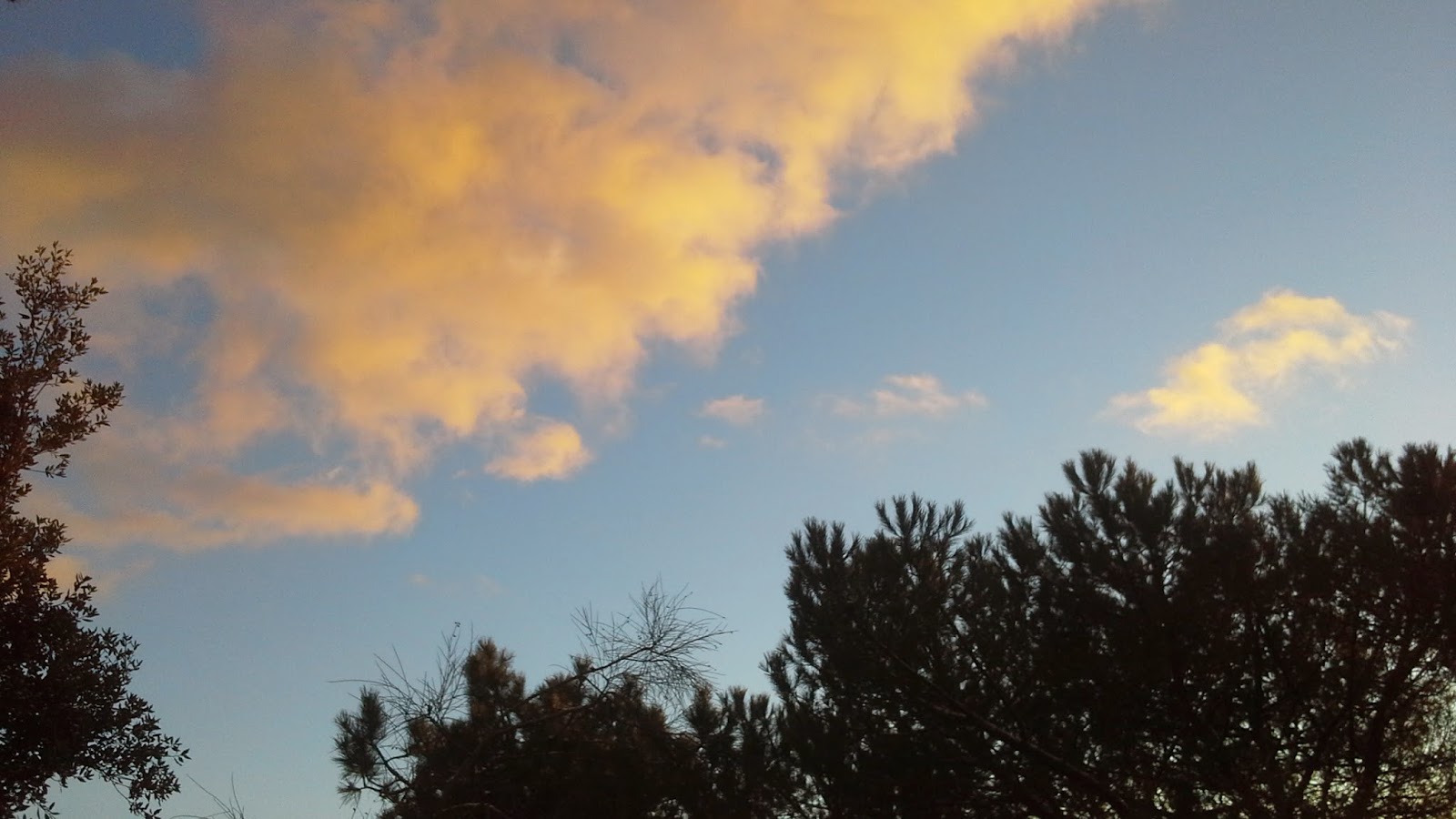 When the sun began to set, the snow in the trees looked like fire. 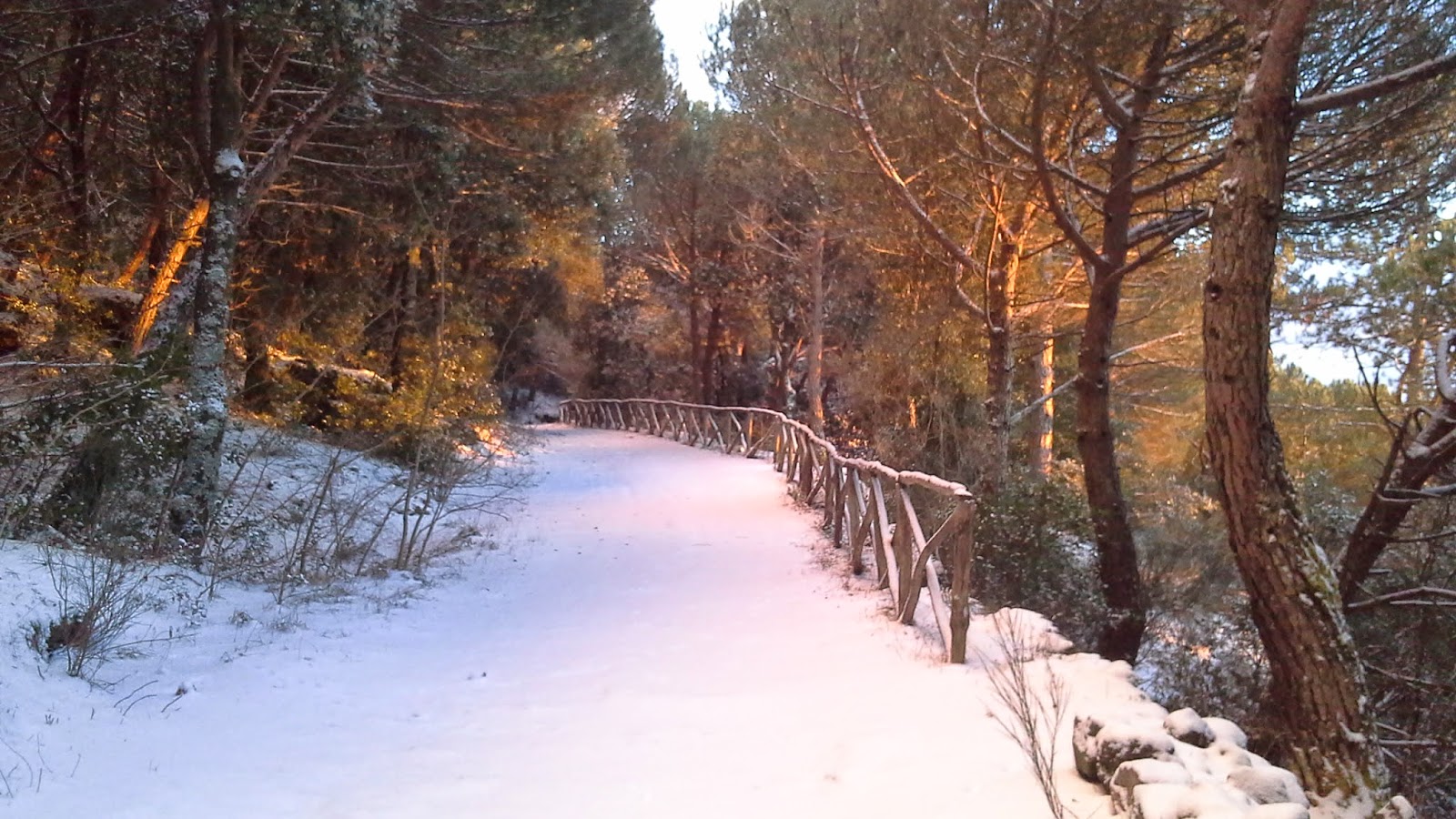 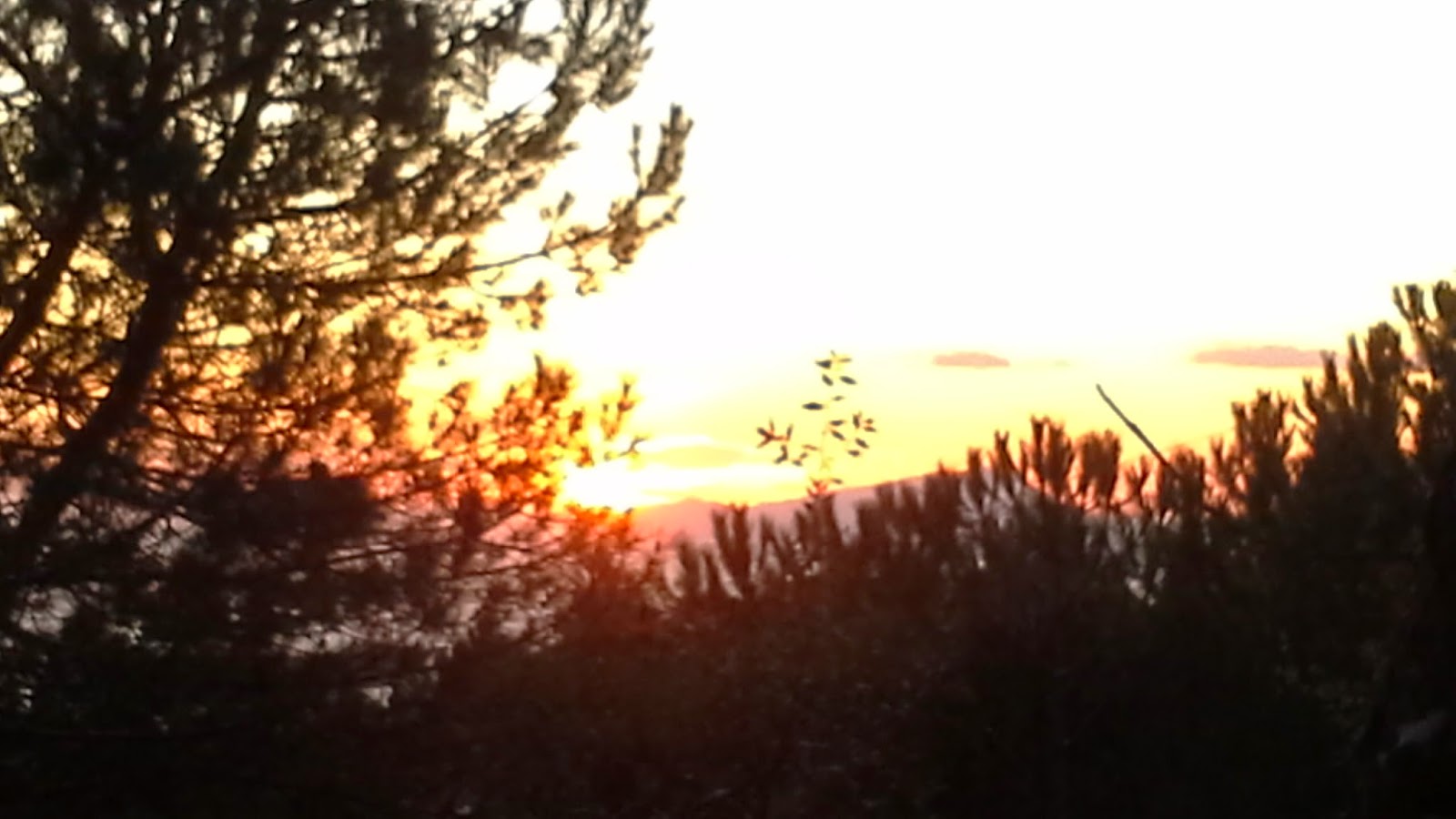 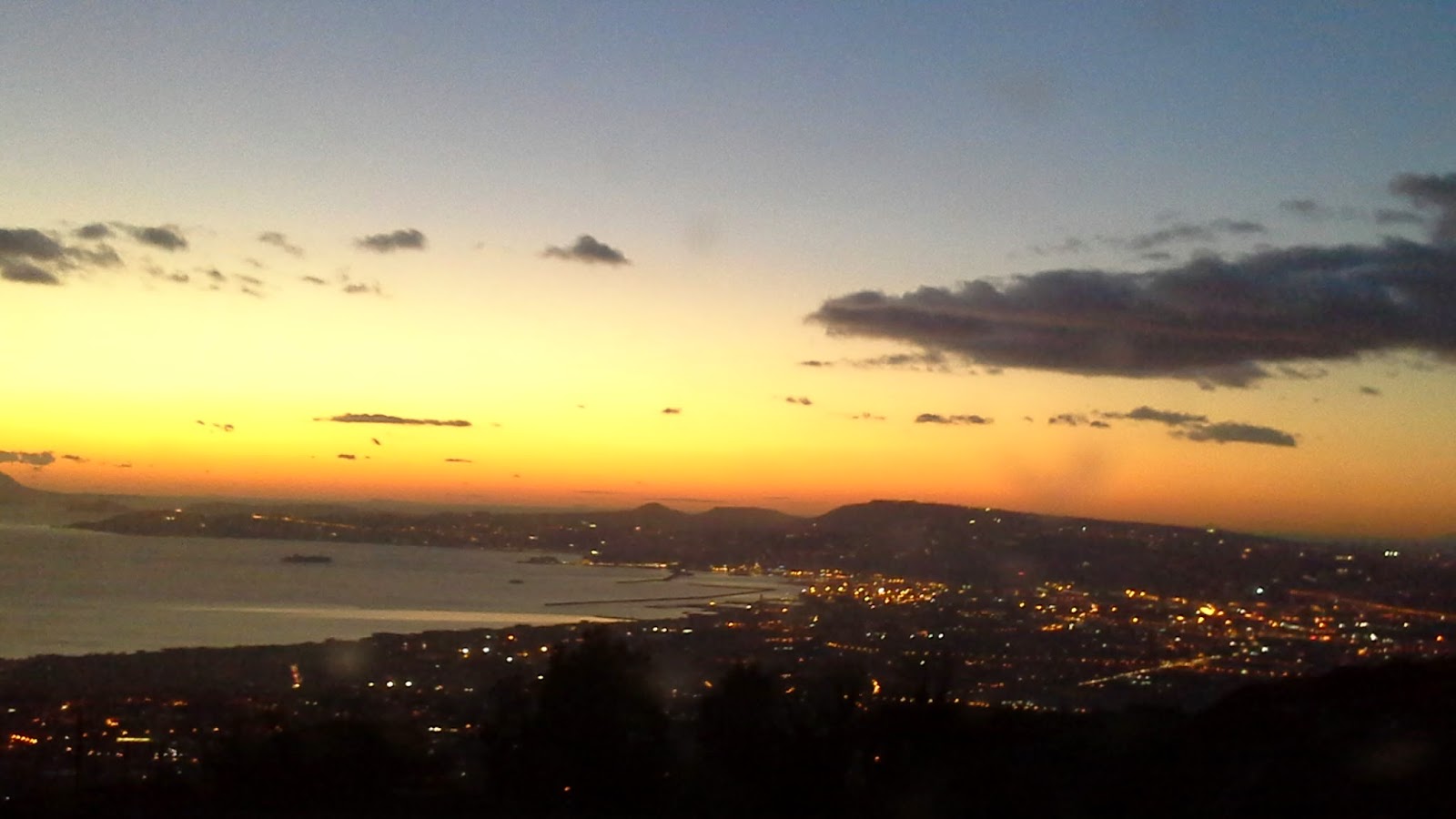 On the way down, Naples lit up hot in the cold night, a flow of electrical energy around the mountain.

Davide took us on a crazy drive through the city and to Piazza Bellini where we ate pasta and polenta and drank Limoncello and told stories of our adventures. I learned about gourmet moonshine and the Facebook antics of American Cowboys and heard stories about Emily’s world travels. He ordered something like nachos, but made with bacon and cheese on a bed of potato chips.

Emily and I came back to the hostel full of stories about the best day ever!

We use cookies to ensure that we give you the best experience on our website. If you continue to use this site we will assume that you are happy with it. Cookies PolicyOk